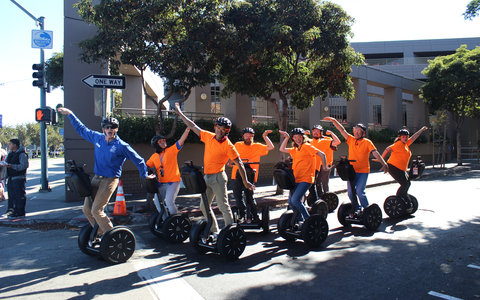 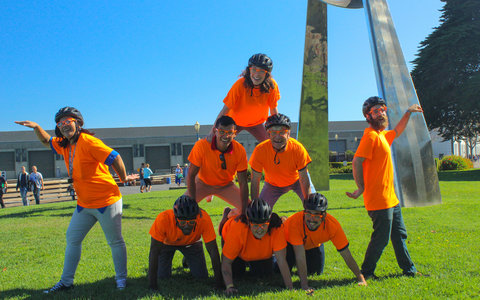 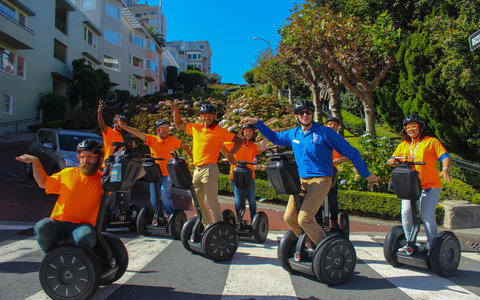 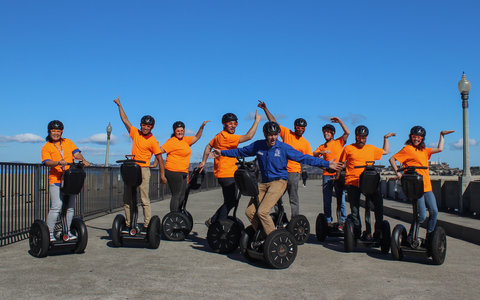 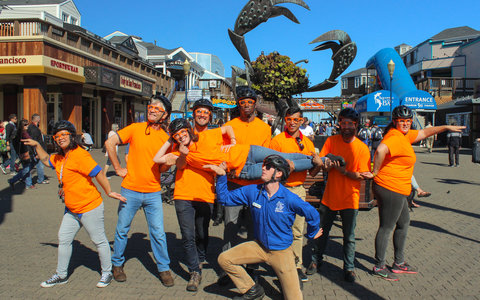 Treat your  group to a team building event they’ll be talking about for years! A Scavenger Hunt on Segways or Electric Scooters is always a memorable outing for groups from 9 to 54 guests! Start at either our Fisherman’s Wharf or Golden Gate Park locations.

HOW DOES A SCAVENGER HUNT WORK ?

Join us on a one-of-a kind Team Building Experience as you compete with your teammates on an exciting Scavenger Hunt through beautiful San Francisco all while riding Segways or Electric Scooters!

First our entertaining guides will provide one on one training and before you know it you will be solving your first clue and gliding through the city or park.

Challenge your team as they work together solving puzzles and clues that lead them to historic landmarks and buildings throughout the North-Eastern portion of San Francisco or Golden Gate Park. Once your team reaches it’s destination you will need to complete a task. Upon completion of your task your guide will provide you with the next puzzle and then away you go! Glide through Fisherman’s’ Wharf, North Beach, Russian Hill, Telegraph Hill, and along the Waterfront or Golden Gate Park on this fun-filled Segway Scavenger Hunt!

Teams will have a blast gliding through the city as they compete against each other for bragging rights and glory! Along the way your Scavenger Hunt guides will share tidbits and trivia about your next destination.

Our Segway and Electric Scooter Scavenger Hunts are 2.75 to 3 hours long, including Segway rider training / scooter operation recap before departure.

We don’t want to give away any of the destinations that our puzzles, riddles and clues lead to but your team will explore the following waterfront neighborhoods in San Francisco, as time permits.

We offer a similar Scavenger Hunt in Golden Gate Park that incorporates:

Scavenger Hunts are a minimum of 9 and a maximum of 54 guests per departure. Larger Scavenger Hunt groups starting in Fisherman’s Wharf may be split between our 2 nearby wharf locations. In Golden Gate Park groups will start in one location near the Japanese Tea Garden.

OPTIONS TO CUSTOMIZE THE SCAVENGER HUNT

“Totally awesome time! We did the scavenger hunt option and our tour guides were easy going, fun, and professional! Great way to see the City and experience it on a completely different level”

‘Great fun! Well worth booking it! They show you everything you need to know! And very fun people!!”

“Your company always delivers excellent services. I have planned two big 18 plus guest events and have not been disappointed”

“Our tour guide was excellent – our Nike team loved this Segway experience!”

IF YOU HAVE ANY QUESTIONS

HOW MANY PEOPLE CAN GO?

Scavenger Hunts are a minimum of 9 and a maximum of 54 guests per departure time. Groups are split into teams: between 2 and 5 teams of 4 to max 12 riders each.

Golden Gate Park Groups cannot exceed 9 participants per Scavenger Hunt activity leader.  Example for 36 guests in park it will be 4 groups of 9 participants.

Larger Scavenger Hunt groups may be split between our 2 wharf locations to facilitate training everyone in the shortest time. The Wharf locations are 2 1/2 blocks apart. The Golden Gate Park location can easily handle up to 36 participants training at one time.

We can do groups larger than 54 with staggered departure times. Generally the additional groups depart 1 hour after the 1st group complete rider training and leaves start location.

WHAT ARE RIDER REQUIREMENTS?

All Electric Scooter Tours and Activities: Age 16 and up and under 290lbs (131kg)

Guests under 18 years of age must be accompanied by a parent or guardian.

Pregnant guests are not allowed on the tour due to fall risk.

Segways and Electric Scooters are not recommended for guests with some mobility, motor control issues or recent surgeries.  This activity is not recommended for some guests age 70 and up due to fall risk. If you are concerned about mobility issues please call us to discuss before booking. We want every rider to have a safe tour.

Segway Riders must be able to easily and quickly step on and off the Segway without assistance, which requires physical abilities similar to climbing and descending stairs without any assistance or use of a handrail. You will be standing for 2 hours.

Scooter Riders: NOTE: If you have never ridden a bike this may not be the activity for you. Riding a scooter requiresside to side balance similar to riding a bike. IMPORTANT: Due to time limits we CANNOT provide riders with no previous bike riding experience with  full training on riding and most importantly balancing on a scooter.
The equipment recap and skills overview session provides riders with a quick overview of the scooter controls, knowledge, and experience needed to safely operate the Scooters. You will  be guided through a low speed ride and an emergency stop to ensure a safe, enjoyable experience.

Be able to stand on the Scooter or Segway for a period of 1-2 hours.

Helmets are provided and required.

All guests must review and sign a guest liability waiver.

On some hills the scooter will require a bit of “kick” to maintain momentum. The electric motors are helpful on the hills but are not strong enough to propel heavier guests up some slopes. Be prepared to kick.

CAN THE SCAVENGER HUNT BE CUSTOMIZED ?

Custom scrips or clues built around a company or group identity
Ending at a remote location.
Box Lunches, meals and picnics.
Ending at a local restaurant or event destination.
Prizes for Scavenger Hunt winners.

Our Segway Scavenger Hunts are 2.75 to 3 hours long, including rider training before departure.

The minimum time is 2 hours as the rider training portion is approx 30 minutes.

CHECK OUT THESE OTHER TEAM BUILDING OPTIONS